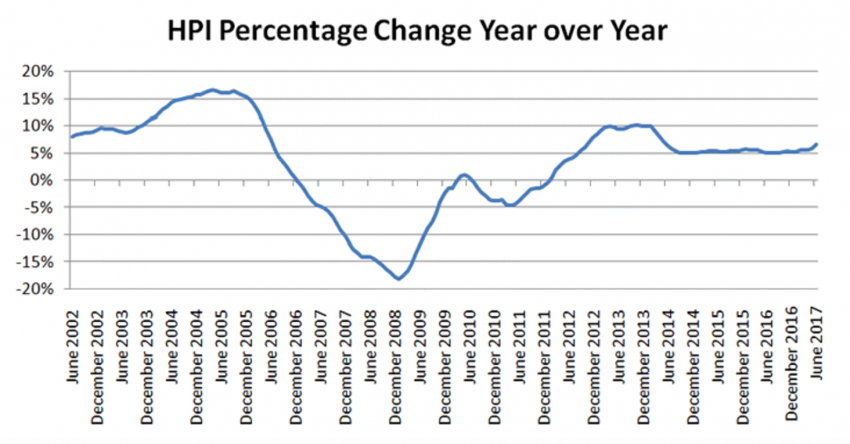 Despite some laggards, many U.S. metro housing markets are quite strong in 2017.

Low mortgage rates will continue to be key to the recovery.

2017 has been a banner year for some U.S. metropolitan housing markets. And while there have been a few laggards among major cities, nationwide housing prices remain buoyant as the real estate recovery continues.

Let’s take a look at some leading and coincident indicators for the real estate market. Like many financial assets, home prices were stuck in a sideways trend from 2014 until 2016 when viewed from a yearly percentage change perspective. The frustrating lack of strong movement in housing prices convinced many speculators that housing prices weren’t going anywhere anytime soon.

The chart below courtesy of CoreLogic shows the Home Price Index on a year-over-year basis. Increased tax and regulatory burdens imposed by the previous White House administration contributed to the 2014-2016 slowdown, as did the uncertainty generated by the oil patch bust. As the recent upward turn suggests, however, prices have recovered on a national level this year, particularly heading into the summer.

Entering 2017, investors were cheered by the belief that the incoming Trump administration would be more pro-business than the last one. This belief is still reflected in the fact that national real estate prices ticked higher on a yearly percentage change basis, as shown by the above chart.

Now that the uncertainty has lifted to a large degree, housing prices in many cities went higher, confirmed by strength in real estate and construction stock prices. Shown below is a 2-year graph of the iShares U.S. Home Construction ETF (ITB). Home construction and building supply stocks have confirmed the notable improvement in new construction in recent years. ITB is a good proxy to use for gauging intermediate-term strength/weakness in the home building industry. When it’s in a rising trend, as it has been of late, it tells us that the broad real estate outlook is still positive.

Another leading indicator of the broad U.S. real estate market is the yearly percentage change in new private housing units authorized by building permits. As long as this indicator is above the zero level, the intermediate (6-12 month) outlook is considered to be positive. As can be seen here, the building permits indicator is still reflecting strength after a brief scare last spring.

One of the key factors which have allowed real estate prices to advance since the bottom in 2012 has been low mortgage rates. With the 30-year fixed rate mortgage near its historical low, prospective homeowners have a major inducement to buy. It’s well known that rising mortgage rates tend to be detrimental for the real estate sector if persistent.

Mortgage rates have remained stubbornly subdued for years, however, which has been a great boon to the housing recovery. Every major housing market slowdown has been a product of rising rates, particularly on a percentage of change basis. As long as they remain near the levels of the last 5-6 years, the recovery in the U.S. housing market should face no major obstruction.